"I laugh when I hear the humanists whining about the reduction of people
to ciphers. What makes them think the destruction of men complete with
tricked-up names is any less inhuman than their destruction as a set of
numbers? I have already said that the obscure antagonism between the
would-be progressives and the reactionaries boils down to this: should
people be smashed by punishments or by rewards? As for the reward of
celebrity, thanks for nothing!" – Raoul Vaneigem, The Revolution of Everyday Life, Chapter 15 (Roles), Section 5.

"When people are overtaken by joie de vivre they are lost to leadership
and stage management of any kind. Only by starving the revolutionary
masses of joy can one become their master: uncontained, collective
pleasure can only go from victory to victory." – same as above, Section 6.

Congratulations to the German Greens for increasing their support in the German Federal elections from 8.1% to 10.7%.  It is a shame they will remain in opposition, but that they will have more MPs to advocate for Green values.

Also, congratulations to the German Pirate Party for receiving about 2% of the vote in the election.  While not the 5% they needed to get MPs in the Bundestag, still quite a respectable showing for such a new party.  Keep up the fight!

BTW, there is an interesting discussion about the election at Matthew Yglesias blog.

Joseph Stiglitz and Amartya Sen, at the request of the French Commission on the Measurement of Economic Performance and Social Progress, put out a report on alternative methods for measuring economic performance. Such methods include Gross Domestic Product (GDP) statistics, but the report calls for including social and environmental factors.

Herman Daly and many others in the Ecological Economics community have been calling for better measures of our economic, social and environmental progress for over twenty years.  Indeed, Redefining Progress already releases its Genuine Progress Indicator each year, though at a three year delay.

Edward Harrison of Credit Writedowns rightly points out (via Naked Capitalism) that GDP is an inadequate measure of our economic state.  Rather he wants to be sure that our economic statistics include not just income (GDP), but debt.  I completely agree with him and hope that such revised metrics, note the plural,  include measure such assets as our environment, the health & education of our people and other non-market debts and assets.

Hopefully this report will put a pressure on the world's governments to devise and track metrics that better reflect our economic, social and ecological progress.  Until then, we should create and track our own community indicators.

Ralph Nader has a novel out: Only The Super-Rich Can Save Us!  Here are Doug Henwood's take & io9's take.  I wish it were satire, but apparently it isn't.

Fall is here and with it the cold.  I am in the process of cleaning and trimming the miniatures I want to prime before it becomes too cold out doors to do it.  This includes:

With any luck, I'll also finish trimming 2 Shadow Omegas.  A bit under half way done so far.

Also, I ran a game where the Shadows try to run a Torvalus blockade.  We had to cut it short due unexpectedly.  I'll post the pictures I shot with my cell phone soon.

A few bits on sacrifice from Raoul Vaneigem's The Revolution of Everyday Life, (Chapter 12) which I am reading now:

"The refusal of sacrifice is the refusal to be bartered. There is
nothing in the world of things, exchangeable for money or not, which
can be treated as equivalent to a human being. The individual is
irreducible. He is subject to change but not to exchange. Now, the most
superficial examination of movements for social reform shows that they
have never demanded anything more than a cleaning-up of exchange and
sacrifice, making it a point of honor to humanize inhumanity and make
it attractive. And every time slaves try to make their slavery more
bearable they are striking a blow for their masters."

This book and Thucydides' History of the Peloponnesian War are the two books I am striving to finish of late.  Sigh… the Sicilian Expedition, about which I am reading, was yet another case of imperial overstretch.  Not like our current follies.

Irving Kristol, "godfather of neoconservatism", died on the 18th.  A friend blogged about this quote from Kristol:

Here he is expounding on the need for "Noble lies".  Glad we got that cleared up.  Nice to know the "grandfather of neoconservatism" thought it was ok for elites to lie to us lowly citizens.  Its for our own good after all.

Considering the last eight years of lies: Iraq has WMDs, we need to bail out the fat cats on wall street who save the economy, the planet isn't warming because of our emissions of CO2, housing prices will keep going up, the rich deserve their wealth, I'd rather some truth please.

The Reason magazine article, don't worry they are libertarians, that reports the previous quote has this little Kristol gem as well:

"If God does not exist, and if religion is an illusion that the
majority of men cannot live without…let men believe in the lies of
religion since they cannot do without them, and let then a handful of
sages, who know the truth and can live with it, keep it among
themselves. Men are then divided into the wise and the foolish, the
philosophers and the common men, and atheism becomes a guarded,
esoteric doctrine–for if the illusions of religion were to be
discredited, there is no telling with what madness men would be seized,
with what uncontrollable anguish." (cite).

Seems to me that the Golden Rule of "do to others what you would like to be done to you" is pretty universal.  Whether given from a god, gods, or just something we developed in our long evolution, it doesn't much matter.  However, Kristol seems to believe "he who has the gold makes the rules".  How very Machiavellian of him.  I'll leave out the Dante reference.

The Left Business Observer (LBO) just put out another useful issue.  There is great deal there about the state of the economy, the fact that most of the increase in consumption is due to the increase in health care costs, the attempts to fix health care, and whether the economy really is deleveraging from the debt boom we have been in for over twenty years.  Full with lots of good details while a quick read and pretty inexpensive to boot.

One thing I want to call out is one of the end articles on the rich.  Thanks to Doug Henwood of LBO, I am able to provide you with two of the graphs in the article.  By the way, the source data for the charts below comes from the IRS by way of economists Emmanuel Saez and Thomas Piketty.  See my previous post The rich continue to get richer to find a link back some of their papers. 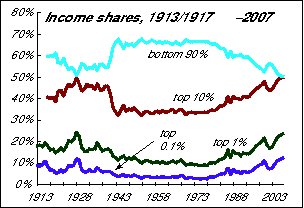 The graph speaks for itself, but for the post World War 2 period until the late 1970s/early 1980s, income for the bottom 90% was about 2/3.  During Reagan, and later, the wealthiest 10% claimed a greater share of the income produced in the US, to the point that they receive about 50%.  The dip in the end of the series is the 2000 recession.  Clearly eight years of Clinton didn't hinder the trend of the rich getting more.  One other thing to call out is that much of the change in the income share of the top 10% is due to increases in the top 1%.  This will become obvious below.

What is not shown is the shares for those in the bottom 50% or even 20%.  Based on other things I read, my guess is that those shares declined as well.

The next chart shows the percentage gains in income by group for the periods of 1948-1973 and 1982-2007.  Both are 25 year time periods and the first period reflects the post-World War 2 economy while the later represents the last 25 years (since the data set goes up to 2007.) 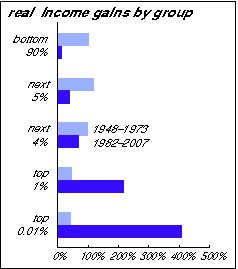 So if you aren't in the top 1% and you are wondering where yours went, you know who got it.

My wife suggested that I view this video from Ireland. I highly recommend it for folks as it is creative while making you think and personalizes an issue that I think too many people only think about abstractly and reflexively. Well done!