Naked Capitalism brought my attention to this video on what drones can do and what they might do in the future.  It makes for rather concerning viewing.

Personally, I have no doubt that within the next ten years, drones will be small enough and cheap enough to follow us and record all of our actions in public.  My guess is that many of us will have more than one permanently following us.  My guess is that people will object to governments tailing us with a drone, though I wouldn’t put it past them.  However, I wouldn’t put it past corporations to monitor the public lives of their employees or ex-spouses for that matter.  I am sure that many might have them to monitor themselves.  The government could then use a warrant (or not) to gather the recordings.

I keep thinking of writing a story of woman as she goes about her day, from greeting the drones that keep track of her in the morning to saying good night to them, and everywhere in between.  There would be one from the corporation she works for, one from her ex-husband, one from her child’s school, one from the school where she takes night classes, and so on.  The cheaper drones become, the more we will use them, afterall.  If you want to write such a story, you have my blessing, though please contact me so I can promote it.

On to the video.

By now some of you have heard about or read the recent Washington Post story by Greg Miller about the Obama administrations efforts to make permanent its powers to kill anyone on the planet in the name of the war on terror. Glenn Greenwald, talking about the Post story and citing work by the ACLU of Massachusetts on the government's continuing attempts to increase their surveillance of us all, paints this chilling picture:

What has been created here – permanently institutionalized – is a highly secretive executive branch agency that simultaneously engages in two functions: (1) it collects and analyzes massive amounts of surveillance data about all Americans without any judicial review let alone search warrants, and (2) creates and implements a "matrix" that determines the "disposition" of suspects, up to and including execution, without a whiff of due process or oversight. It is simultaneously a surveillance state and a secretive, unaccountable judicial body that analyzes who you are and then decrees what should be done with you, how you should be "disposed" of, beyond the reach of any minimal accountability or transparency.

As if this were not bad enough, we know we have entered new territory in the destruction of our rights when a government official likens drone strikes to swatting flies as in this quote from Micah Zenko's Council on Foreign Relations post, Institutionalizing America’s Targeted Killing Program:

“It really is like swatting flies. We can do it forever easily and you feel nothing. But how often do you really think about killing a fly?”

Will you are I be a fly to some future administration? If we are, as Spencer Ackerman at Wired noted, we can thank Obama for that.

While I didn't catch enough of the Dem/Rep. VP debate to assess either candidate's performance, a friend drew my attention to this dressing down by the (female) prime minister of Australia for the (male) leader of the opposition's attempt to tar the prime minister with the text-messaging scandal of one of her allies.  Perhaps the Dems could take advice from Julia Gillard, Australia's first female prime minister, on how to support women's rights with gusto.

So to summarize for those who didn't want to watch the whole takedown, and you missed a lot of fun if you didn't watch it, the leader of the opposition is:

As I said, a spectacular takedown.  Wish we had more such examples in the US.

Of course, this episode begs the question of when are politicians going to learn that everything they ever do in public, and likely semi-public, will be available for others to use against them?  My guess would be when people actually use that information against them effectively.  Until then we will have more politicians saying "those aren't the 47% you are looking for".

I finally moved the whenimaginationfails.org and bywillalone.org domains over to this blog. 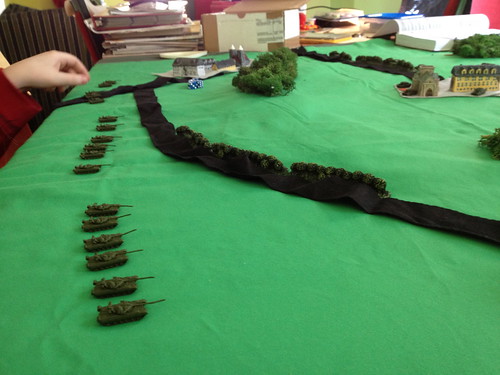 Many months ago I ran a game with my son to test Fistful of TOWs 3.  The game was of a Soviet T80 tank regiment assault on two companies of West German Leopard 1A4s. My son played the Soviets and I played the West Germans.

The Soviets attempted to flank the Germans from both sides and ended up destroying the German defenders, though at a loss of nearly half the regiment.  In retrospect, the center battalion should have held off its attack until North and South battalions commenced their attack.  Amazingly, the last stand of the center tank battalion managed to survive its morale check.  I put up a slide show of the game.

In addition to this game, I ran another game that I will post about later.  I haven't had much time to game, though I painted my LeClercs and YPR-765s.

I think some of the tech is still awhile away, but that doesn't mean it won't be there in my or certainly my kids' lifetimes. Already we are seeing fingerprint scanners being used to id kids when they pay for their school lunches in Maryland and LA.

No doubt convenience and security will be the justificaton for expanding these surveillance tools.  If you doubt that they will be abused, then look no further than what access to your information mobile phone carriers are providing to the police without a warrant:

Even land lines aren't safe as Verizon will allow police to:

Charming world we are building.  As Franklin is quoted as saying:

They who can give up essential liberty to obtain a little temporary safety, deserve neither liberty nor safety.

I first came across PSY's Gangnam Style video on 8/30 via Naked Capitalism, of all places, when they linked to Open City's commentary on it: Viral vid ‘Gangnam Style’ critiques Korea’s extreme inequality.  I confess that I read the article and never watched the video.

That is until someone shared this video:

Once shared, watching the original was required:

The thing that struck me about the parody Klingon Style video is how much of the commentary of the original (read the article Viral vid ‘Gangnam Style’ critiques Korea’s extreme inequality to understand) was lost.  It follows the original faithfully, but by changing the context from present day South Korea to Star Trek, it loses the original video's meaning.

However, this remix with North Korean government video shifts the context, but doesn't change the meaning as much:

For me, the closest remix that comes close to the meaning of PSY's original is this one:

Of course, ultimately, the objective of any of these videos is to entertain, and remixing does not require that the meaning of the original be retained. The whole series of parody clips of Hitler reacting to various current events from the movie Downfall is one of the best cases. So of course it should come as no surprise there is a Hitler Style remix using clips from the Downfall movie with the Gangnam Style sound track.

The fact that the Gangnam Style parodies exist and aren't being removed by DMCA takedown orders, seems to be because PSY realizes that the parodies get people to watch the original (or its many variations) and that gets people to buy the song. After all it is #2 on the Billboard charts.  Perhaps the recording companies and the RIAA will finally clue into this and stop trying to get Congress to pass censorship and spying laws like SOPA.

All in all, it does make me want to reread Guy Debord's Society of the Spectacle.