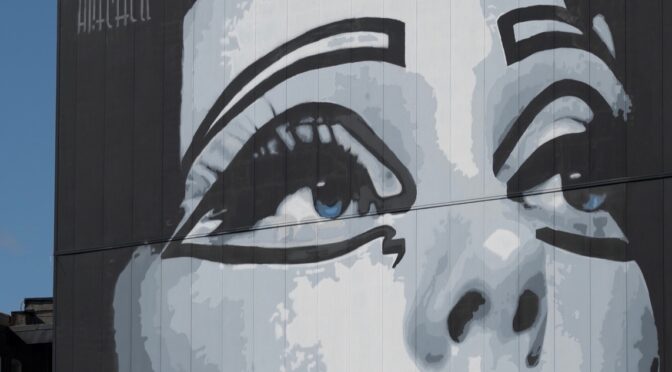 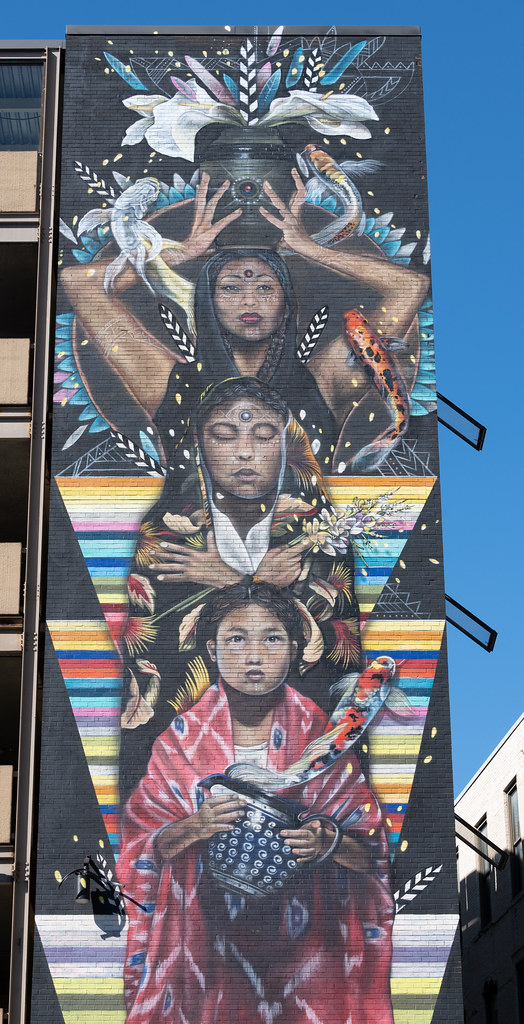 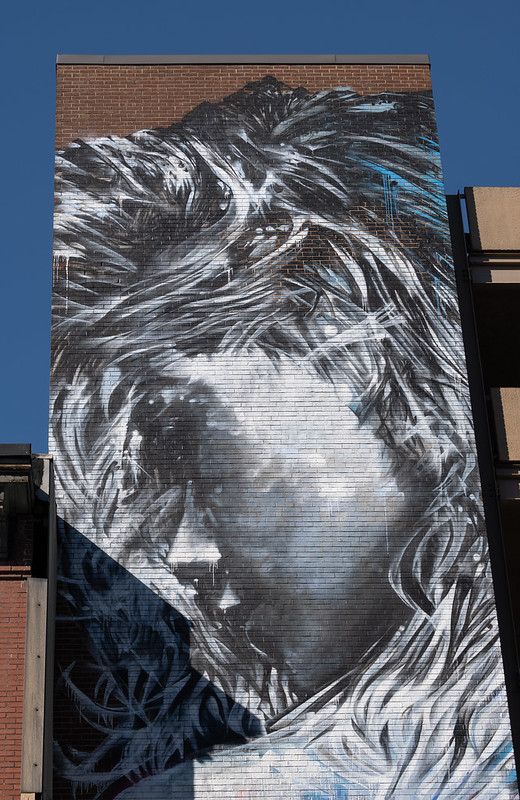 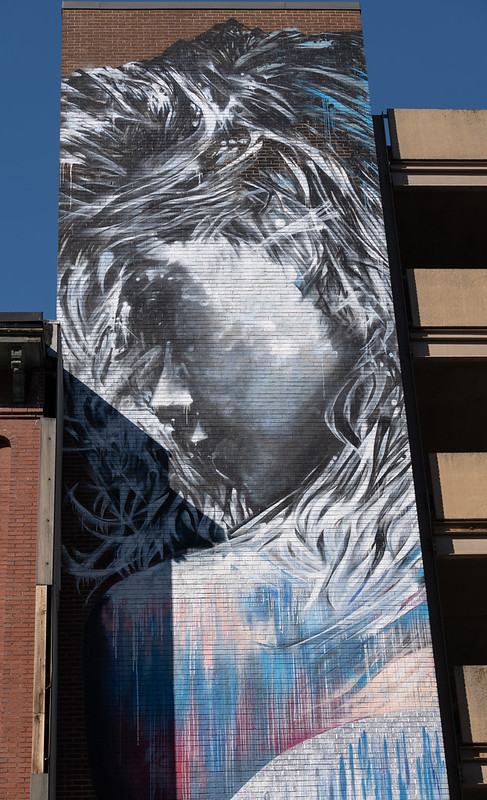 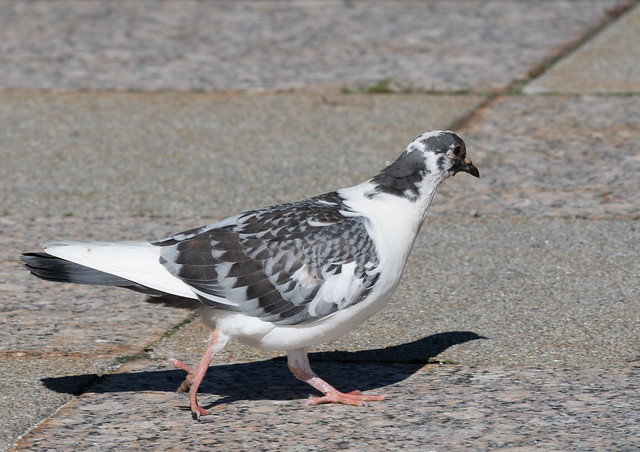 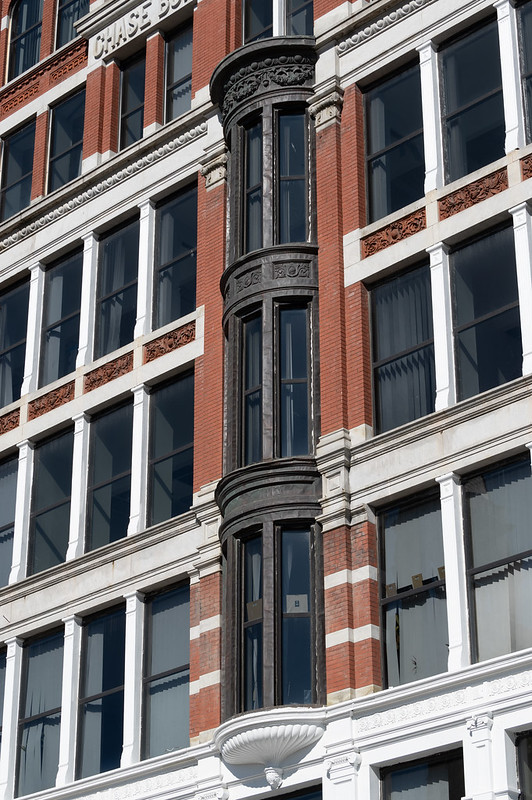 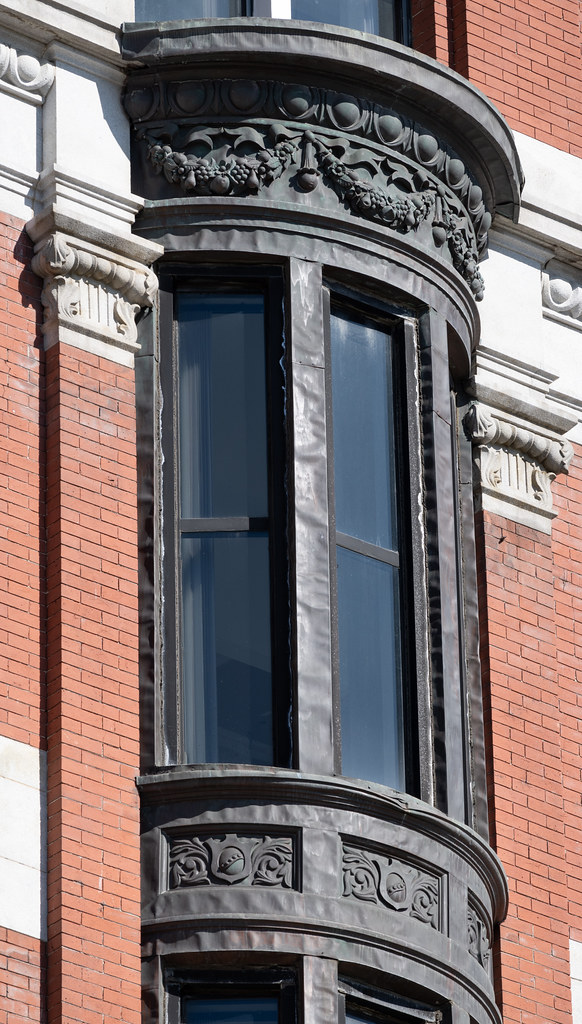 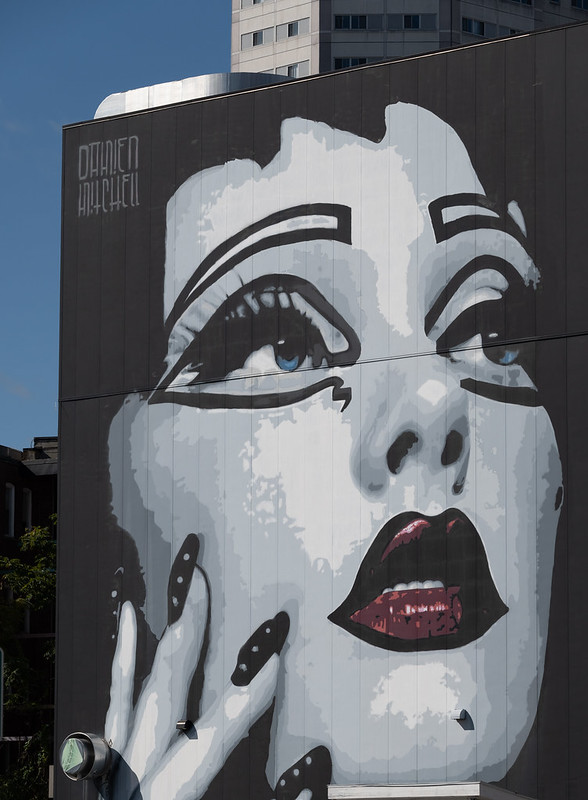 Steve and I talked about the CDA Section 230 gutting SAFE TECH Act on the latest Pirate News livestream. You can read a redline version.

Some of the articles we reference:

We live stream Sundays at 7:30pm Eastern. You can find past recordings at MassPirates.org.

Reposting this from the Massachusetts Pirate Party. If you live in Boston, do contact your city councilor and tell them to support this ordinance. Details below.

Today at 3pm, Boston City Council’s Committee on Government Operations will discuss a proposed ordinance to ban face surveillance in Boston. The hearing will be by Zoom meeting and the public may watch this meeting via live stream at boston.gov/city-council-tv.

It is too late to address the committee, but you can still provide written testimony. Details below. The ACLU put together a toolkit for activists that includes model testimony. There are also public education resources available at https://aclum.org/presspause.

Please attend the hearing and help out in the following ways:

Written comments may be sent to the Committee or staff email (below) and will be made a part of the record and available to all Councilors. 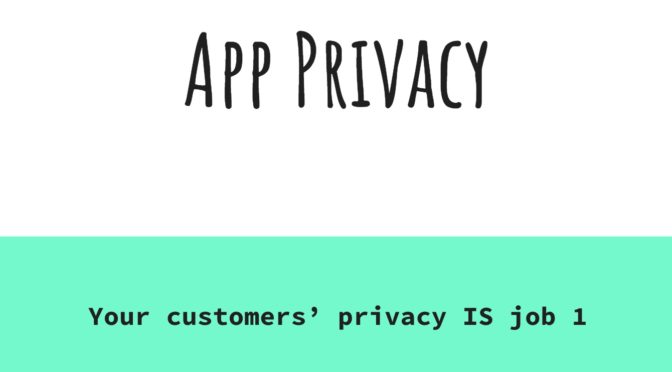 I gave an application privacy workshop at Code for Boston on Tuesday. They recorded my talk on Facebook:

I posted the slide deck as a PDF. Feel free to offer suggestions in the comments.

Some of the topics I need to add to the presentation:

Scott Helme is a Information Security Consultant. He has a Patreon account on which he posts about computer security issues and which he uses to take in donations for each blog post.  Recently he found out that Patreon suspended his account:

So @Patreon suspended my account.
They did this in secret. They have not notified me.
I simply noticed that they stopped sending me money.

He could still post and people could still signup to support him, but, taking a page from Paypal, Patreon prevented him from withdrawing any of the money people donated.  Eventually, Patreon completed their investigation and emailed him that he was good to go.  He eventually discovered that:

* a few emails further up I got this. Apparently someone suspicious pledged to me so they suspended my account to make sure it hadn’t been hacked. Can anyone explain that to me? ? pic.twitter.com/o9V1dQfUpP

He estimates that account withdrawals were suspended for between 18 and 47 days.

Account takeovers are a real problem. Had his account been taken over, it would be good if someone couldn’t take his money out and notifying the account that they think it might be hacked could tip the hacker.  In that light, it could make sense to act as they did.

Having multiple other methods of contacting the user would have helped in this case…. well unless email, phone number and Signal were compromised. Patreon would need to prove they are who they say they are, of course. Phishing is a problem as well.

That all said, going from one fraudulent pledge to account takeover seems a stretch.

But this incident reminded me of Violet Blue‘s reporting in Engadget about a troll campaign against women AMSR video creators:

Capitalizing on entrenched and easily exploitable anti-sex policies by internet giant payment processors and a new internet sex panic ushered in by FOSTA, 8chan trolls have started a campaign to mass-report attractive women who make ASMR videos. Listing names of women making these sound-effect videos in a forum thread called “PayPal lowering the hammer on ASMRtits” they’ve declared war by posting links to report pages for PayPal, and called upon fellow haters to get the women kicked off YouTube and Patreon as well.

… and that Patreon just added another method for trolls to harass Patreon’s users.  If all it takes is for one fraudulent looking donation to pass into someone’s account to flip the Account Hacked bit, trolls will use Patreon’s process to suspend a user’s ability to withdraw their money for two to six weeks. That would screw up the life of anyone who makes a living via Patreon.

Patreon has more than a customer service problem.

I posted this over at the Massachusetts Pirate Party blog.

Election day is today. Polling places are open until 8pm. You can find your polling place at WhereDoIVoteMA.com.

If you believe you are registered, but you aren’t listed on the voter rolls, don’t walk away. The law says you can demand a provisional ballot and get a receipt. Follow up after the election to make sure they count it, but your vote cannot be counted if you didn’t cast it.

When you vote, we ask you to vote yes on Questions 1 and 3 and support any third-party candidate you agree with. You can find out more about the ballot questions below.

As always, we are looking for candidates for the 2019 town and city elections. If you are interested in running, fill out our supporter/candidate form.

More on the ballot questions

Question 1 would set the maximum number of patients per registered nurse which would vary by type of unit and level of care. Our increasingly corporate-controlled health care providers are against it as it would harm their profits. Send them a message that people deserve decent healthcare and vote yes.

Question 3 prohibits discrimination on the basis of gender identity in places of public accommodation. The legislature already approved it, but some anti-trans bigots believe that our fellow trans citizens and residents do not deserve equality and are using lies and fear mongering to try to get their way. Don’t let them win; vote yes.

On Question 2, we have not decided. Question 2 would create a citizens commission to advance an amendment to the United States Constitution to limit the influence of money in elections and establish that corporations do not have the same rights as human beings. We do not believe that corporations should have the same rights as individuals and I agree that we need to remove the corrupting influence of money in politics. Considering the influence of the rich and corporations on both major parties and on politics, it is pretty clear that once we open up any citizens process to amend the US Constitution, the rich will do their best to rewrite it in ways that enshrine their power and ideas. What is your opinion? Tell us in a comment below.

The Massachusetts Elections Division has more information on the ballot questions.

Today during the monthly Somerville Cryptoparty, will be a discussion on how we can move forward with developing a community mesh network in the Boston area.  It will be from 6-9pm at The Sprouts, 339R Summer Street, Somerville. The Sprouts is in the garage in the back of the drive way. Unfortunately, it is not wheelchair accessible.

Hope you can make it and please spread the word about these events. Thanks!

I learned recently from Susan McLucas, a long-time local activist for Chelsea Manning, that president Obama commuted Chelsea’s sentence. She will be released from prison on May 17th. I think I speak for most, if not all, Pirates that we are very happy and relieved that Chelsea will be free in four months.

Thanks to everyone who kept up their support for her and indeed increased it. I personally appreciate the effort of the Chelsea Manning Support Network, Evan Greer, Fight for the Future, Susan McLucas, Veterans for Peace, Pirate Parties and their supporters world-wide, the EFF, ACLU and the millions of people who advocated for her freedom.

Chelsea emerging from prison on May 17th will be a glorious day. However, our support for her must not end on that day. She will continue to need our help from those engaging in character assassination whether trolls or politicians. After so many years in prison and solitary confinement, being a free again will come with its own challenges.

So savor this day and the days ahead, for this one act relied on the support of so many and yet again proves that we are more powerful together. 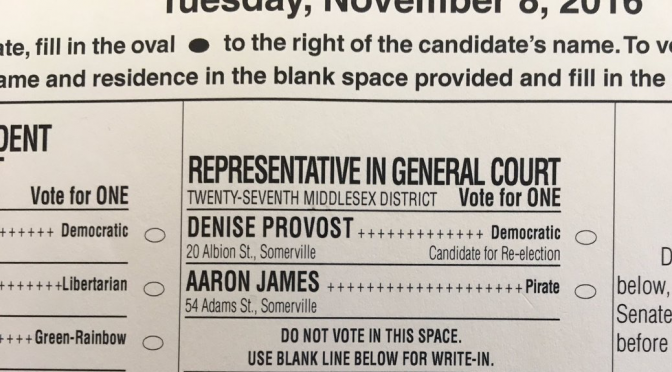 On election day, November 8th, in the next ward over, the Pirate Party is running Aaron James for the 27th Middlesex State Representative district. He is continuing the tradition started by fellow Pirate, Noelani Kamelamela, in 2014.

If you have time this weekend to help flyer or time on election day to stand out or poll watch, please email his campaign or contact them at their Facebook page.

If you are in the neighborhood join us on election night to celebrate.