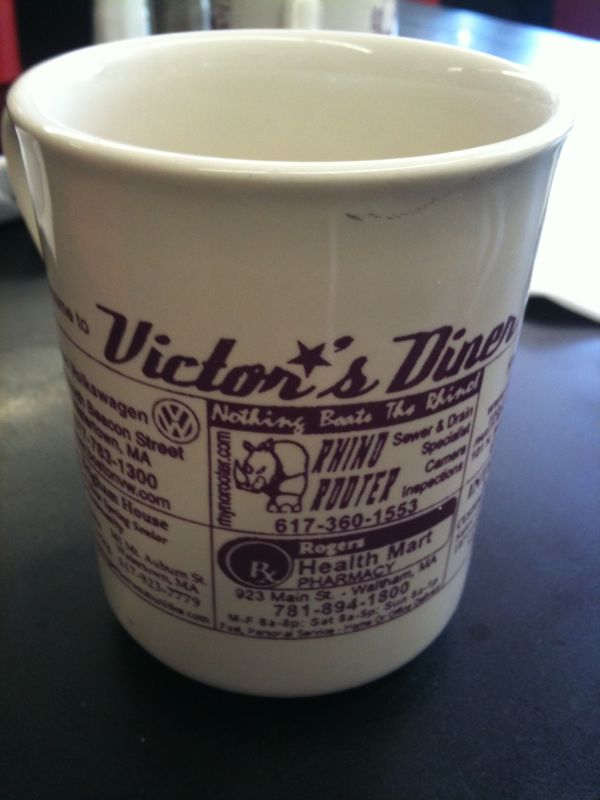 I came across this mug while having lunch with a friend. I immediately thought about what would they do with the mug if one of the advertisers decided not to continue advertising with them. Would they cross out the advertisement?  This of course got my mind working on a solution to this, likely minor, problem.

One possibility is to embed an e-Ink display on the outside of the mug, since they can bend, and update the advertisements wirelessly. You could charge the mug using the new wireless electrical systems that are appearing now. Too expensive at this time, certainly, but perhaps not in the future.

However, cleaning these mugs could be a problem…

Years ago, when I took undergraduate economics, we were taught that as a person’s income increases, their savings increase as a percentage of their income.  The rationale is that wealthier people would rein in their consumption as their incomes rose.  No doubt there more than a few Republican, supply-side boosters who parroted the line to justify why it was fine and dandy for the rich to get so much richer than everyone else.

Reality hasn’t been so accommodating to that line of thought, what with the fall in the savings rate as income inequality went through the roof.  However, i didn’t have good figures until this post by Yves Smith of Naked Capitalism.  Her graphs (which she gets from a Citigroup report on Plutonomy, and why it is a good thing) sum things up nicely: That is savings rate on the right and share of income claimed by the top 1%. Here is the same data as a scatter plot showing the relationship even better.

Certainly, correlation does not equal causation, but falls in the savings rate seems to lag behind rises in the share of income claimed by the top 1%.  I cannot think of a way that falls in savings rates would trigger a rise in the income of the top 1%.  However, as Yves says:

“If you are rich, you can afford to spend all your income. You don’t need
to save, because your existing wealth provides you with a more than
sufficient cushion.”

To simplify things, many folks who are poor don’t have the income to save.  Folks in the middle class have more of an ability to save and see saving for retirement as possible and so do.  The rich don’t need to save.  There is a status incentive for the middle class to spend beyond their means and emulate “their betters.”  Of course, incomes have shrunk for everyone who isn’t in the top 90%, so perhaps folks are spending to keep the status quo.

One interesting result of this condition is that as the savings rate decreases, we need to borrow more from other countries, assuming investment and government deficits are stable as a percentage of income.  Or perhaps investment could fall, leading to a future dismal economy.

[Yes, the title is semi-recycled.]

Here
are a set of recent articles/press releases about some efforts at
nonviolence in Palestine & Israel:

In Thailand, the Red Shirt anti-government protesters (United Front for Democracy Against Dictatorship, aka UDD) have continued their campaign to oust the current government.  This included retaking a pro-opposition tv station that the government attempted to censor.  One of their tactics was to occupy a commercial shopping district in Bangkok causing the shutdown of various malls.

Unfortunately for all, twenty one people have died including four soldiers and eight hundred have been injured when the military attempted to remove protesters from the area they are occupying.

According to the BBC, the head of the army has called for the government to be dissolved and expressed his reluctance to use force.  In a replay of what happened in January of 2009, the Election Commission has decided that the prime minister's Democratic Party should be dissolved due because they failed to declare an $8 million donation from a company during the 2005 election.  The case will be referred to the Constitutional Court as in early 2009.  The UDD brought the case.

The current government may fall soon since it no longer seems to have the support of the military.

Well it seems former Fed Chairman Alan Greenspan is saying he saw the housing bubble, except that he wasn't able to stop it.  If his inability to fess up to his own complicity in the financial meltdown wasn't bad enough, now he wants to blame Fannie & Freddie (GSEs).  As Barry Ritholz wrote back in 2008:

I expect that there will be more attempts by conservatives to blame government laws & regulation for causing the crisis and ignore the fact that a lack of government financial regulation caused the crisis.

Clay Shirky wrote an interesting blog post about "The Collapse of Complex Business Models" (thanks to Boing Boing and TechDirt, among others).  Here is an excerpt:

About 15 years ago, the supply part of media’s supply-and-demand
curve went parabolic, with a predictably inverse effect on price. Since
then, a battalion of media elites have lined up to declare that exactly
the opposite thing will start happening any day now.

To pick a couple of examples more or less at random, last year Barry
Diller of IAC said, of content available on the web, “It is not free,
and is not going to be,” Steve Brill of Journalism Online said that
users “just need to get back into the habit of doing so [paying for
content] online”, and Rupert Murdoch of News Corp said “Web users will
have to pay for what they watch and use.”

Diller, Brill, and Murdoch seem be stating a simple fact—we will have
to pay them—but this fact is not in fact a fact. Instead, it is a
choice, one its proponents often decline to spell out in full, because,
spelled out in full, it would read something like this:

“Web users will have to pay for what they watch and use, or else we
will have to stop making content in the costly and complex way we have
grown accustomed to making it. And we don’t know how to do that.”

With that article in mind, it seems time to revisit another one of his articles, "Gin, Television, and
Social Surplus" that I mentioned to my friend Amy last month and haven't gotten around to sending her:

I started
telling her about the Wikipedia
article on Pluto. You may remember that Pluto got kicked out of the
planet club a couple of years ago, so all of a sudden there was all of
this activity on Wikipedia. The talk pages light up, people
are editing the article like mad, and the whole community is in an
ruckus–"How should we characterize this change in Pluto's status?" And
a little bit
at a time they move the article–fighting offstage all the
while–from, "Pluto is the ninth
planet," to "Pluto is an odd-shaped rock with an odd-shaped
orbit at the edge of the solar system."

So
I tell her all this stuff, and I think, "Okay, we're going to
have a conversation about authority or social construction or
whatever." That wasn't her question. She heard this story and
she shook her head and said, "Where do people find the time?"
That was her question. And I just kind of snapped. And I said, "No
one who works in TV gets to ask that question. You know where the
time comes from. It comes from the cognitive surplus you've been
masking for 50 years."

So
how big is that surplus? So if you take Wikipedia as a kind of unit,
all of Wikipedia, the whole project–every page, every edit,
every talk page, every line of code, in every language that Wikipedia
exists in–that represents something like the cumulation of 100
million hours of human thought. I worked this out with Martin
Wattenberg at IBM; it's a back-of-the-envelope calculation, but
it's the right order of magnitude, about 100 million hours of
thought.

Here is a talk he gave on his book "Here Comes Everybody" which elaborates further on the post's topic.

Looks like I need to pick up a copy of his book.

Apparently the Joo Joo is shiping.  Not anywhere near the numbers of the iPad, but considering its delays and checkered past, that is a good achievement for them.

Also, a German company is coming out with the WePad tablet computer that looks pretty cool.  It joins the iPad, JooJoo and plenty of other tablet computers.  Should be an interesting year.

We have a problem at work, how to get a large amount of data from one distant location to another.  We could dump the data one or more disks and either FedEx it to us or have someone carry it on a plane.  Either is pretty expensive and, if you are bringing it internationally, runs the risk of getting stuck in customs.

We could set up a dedicated line between there and here, but the lead time is a month or more and they want their customers to rent it for a while.

What is needed is a service where you plunk down your corporate credit card and rent a dedicated pipe between two locations for a brief time (a day or two).  The pipe would need to be SSL of course.  With all of the excess fiber rolled out in the late 90s, I would think that someone could pay for dedicated lines and then rent them out for a day or so.

As most people know judging from the volume of hype, Apple's iPad is out today.  Being a long-time NeXT supporters and now a Mac/iPod/iPhone convert, you might think that I would be receiving an iPad today.  Thankfully for our bank account, I won't be.  It certainly looks cool, and I am sure it will do well and I know I will drop by the Apple store to take a look at it, but there is no way we can justify an additional LCD screen in the house.  Besides, I like to wait until they fix the inevitable bugs in the first generation of any product.

That being said, the inexpensive, bare-bones Kobo eReader looks intriguing.  If only I had the time to read enough books to justify it.