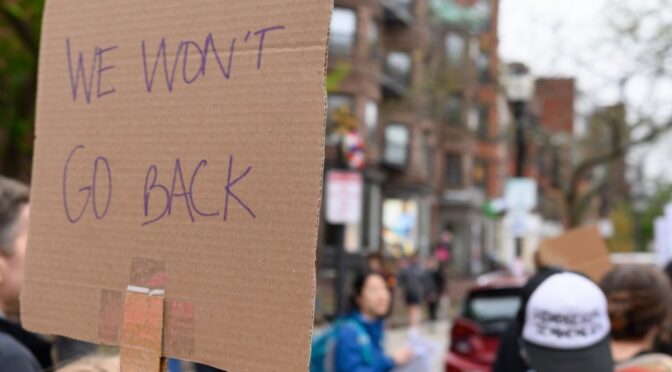 The Boston branch of the Party of Socialism and Liberation held a pro-Choice rally Friday. My wife and I joined it. It was well attended:

The signs were great: 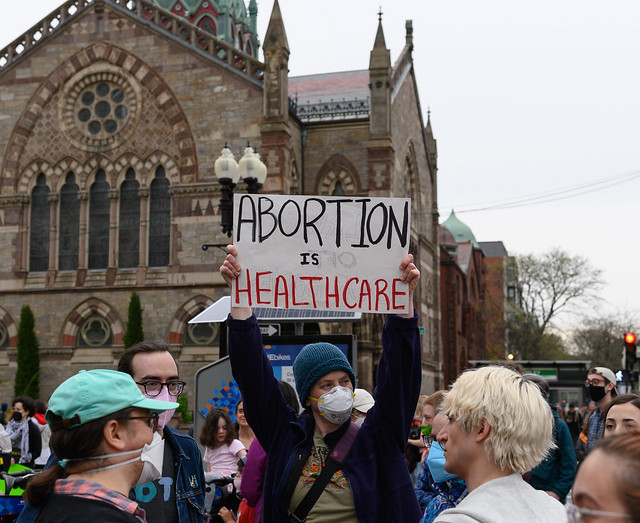 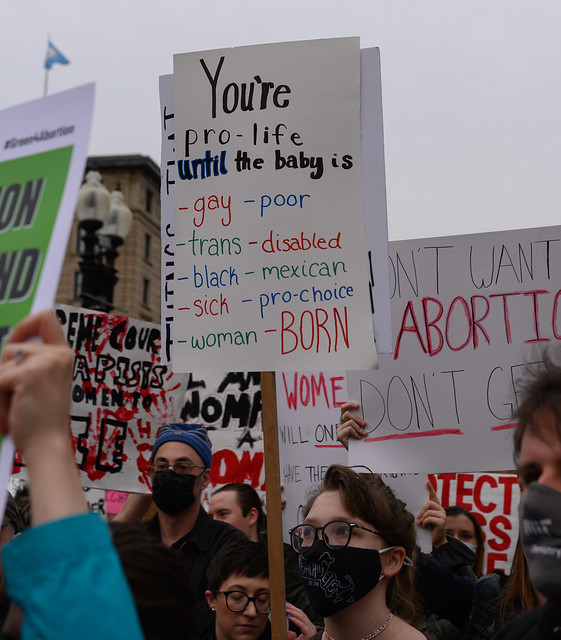 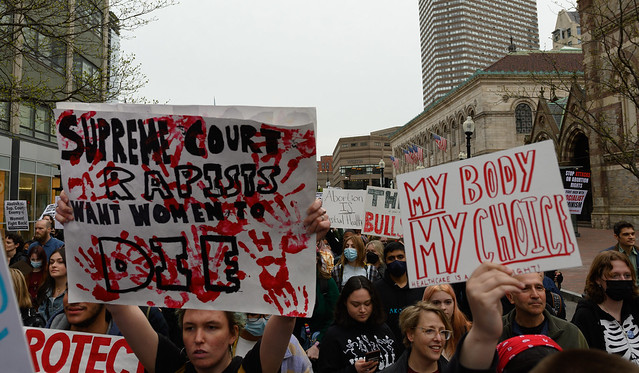 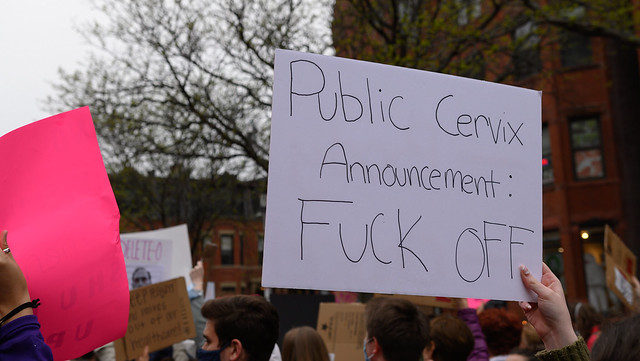 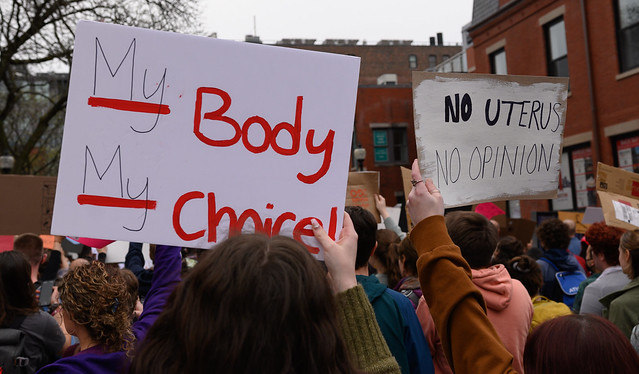 Some interesting photographic opportunities presented themselves: 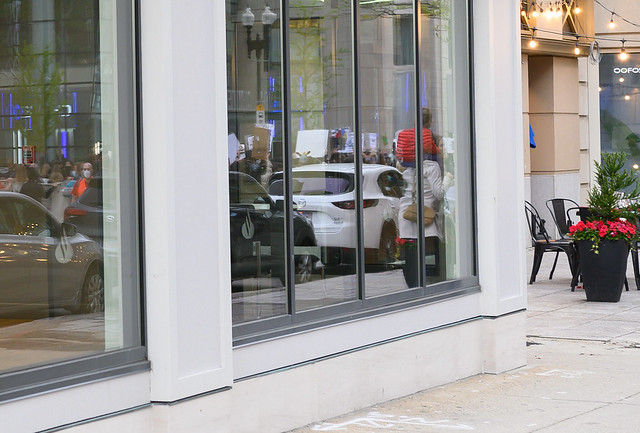 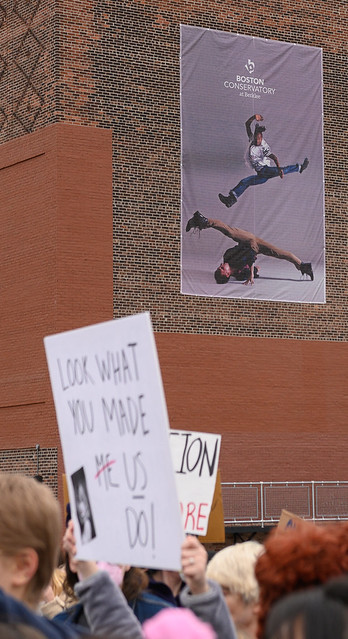 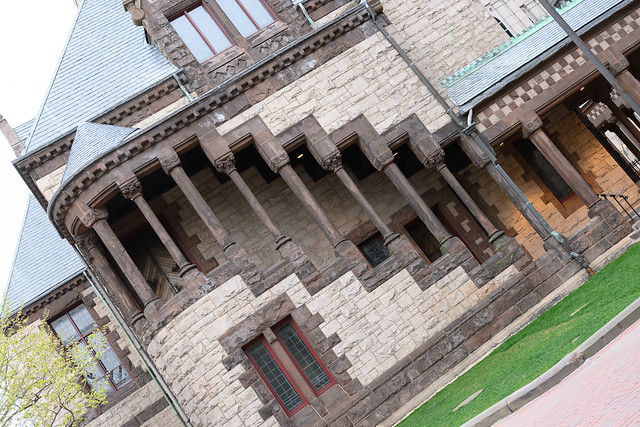 You can find the rest at this album:

Speakers advocated for pardons for Reality Winner and American Indian Movement Leader Leonard Peltier, as well as stopping the extradition proceedings against Julian Assange and US support for the war in Yemen.

You can find some of the photographs I took of it:

Earlier that day I came across the Protected Bike Lanes Save Lives stand out in Porter Square, Cambridge and took this photograph that I hope communicates the need for separating bike lanes from lanes for automobiles:

Alternatively, if you cannot vote on November 6th, you can mail in a request for an absentee ballot to your city or town.

Whenever you vote, I ask you to vote yes on Questions 1 and 3.

Question 1 would set the maximum number of patients per registered nurse which would vary by type of unit and level of care. Our increasingly corporate-controlled health care providers are against it as it would harm their profits. Send them a message that people deserve decent healthcare and vote yes.

Question 3 prohibits discrimination on the basis of gender identity in places of public accommodation. The legislature already approved it, but some anti-trans bigots believe that our fellow trans citizens and residents do not deserve equality and are using lies and fear mongering to try to get their way. Don’t let them win; vote yes.

On Question 2, I have not made up my mind. Question 2 would create a citizens commission to advance an amendment to the United States Constitution to limit the influence of money in elections and establish that corporations do not have the same rights as human beings. I do not believe that corporations should have the same rights as individuals and I agree that we need to remove the corrupting influence of money in politics. Considering the influence of the rich and corporations on both major parties and on politics, it is pretty clear that once we open up any citizens process to amend the US Constitution, the rich will do their best to rewrite it in ways that enshrine their power and ideas.

Find out more about the ballot questions.

If this movie is half a good as its trailer, it should be fantastic. African-American women mathematicians/engineers at NASA during the space program in the 1950s and 1960s. What’s not to like. 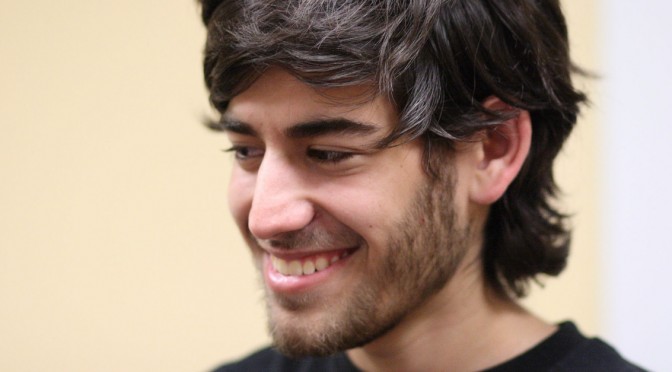 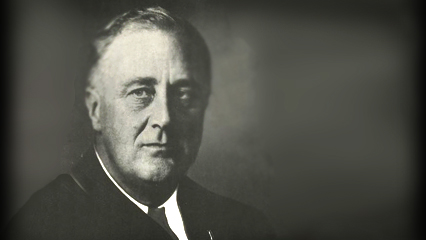 And an equally basic essential to peace is a decent standard of living for all individual men and women and children in all Nations. Freedom from fear is eternally linked with freedom from want. – FDR

Chris Hedges over at TruthDig has a well thought out article on our transition from Huxley’s Brave New World to Orwell’s 1984.  Corporate/Governmental domination R Us.  A few exerpts:

“The façade is crumbling. And as more and more people realize that they have been used and robbed, we will move swiftly from Huxley’s “Brave New World” to Orwell’s “1984.” The public, at some point, will have to face some very unpleasant truths. The good-paying jobs are not coming back. The largest deficits in human history mean that we are trapped in a debt peonage system that will be used by the corporate state to eradicate the last vestiges of social protection for citizens, including Social Security. The state has devolved from a capitalist democracy to neo-feudalism. And when these truths become apparent, anger will replace the corporate-imposed cheerful conformity. The bleakness of our post-industrial pockets, where some 40 million Americans live in a state of poverty and tens of millions in a category called “near poverty,” coupled with the lack of credit to save families from foreclosures, bank repossessions and bankruptcy from medical bills, means that inverted totalitarianism will no longer work.

Those who do not comply with the dictates of the war on terror, a war which, as Orwell noted, is endless, are brutally silenced. The draconian security measures used to cripple protests at the G-20 gatherings in Pittsburgh and Toronto were wildly disproportionate for the level of street activity. But they sent a clear message—DO NOT TRY THIS. The FBI’s targeting of antiwar and Palestinian activists, which in late September saw agents raid homes in Minneapolis and Chicago, is a harbinger of what is to come for all who dare defy the state’s official Newspeak. The agents—our Thought Police—seized phones, computers, documents and other personal belongings. Subpoenas to appear before a grand jury have since been served on 26 people. The subpoenas cite federal law prohibiting “providing material support or resources to designated foreign terrorist organizations.” Terror, even for those who have nothing to do with terror, becomes the blunt instrument used by Big Brother to protect us from ourselves.”

On the face of it I don’t buy that high government deficits mean that the US government will be crippled.  The Fed can easily print money to pay those deficits and we could inflate our way out of our debts albeit slowly and reasonably.  A bit of inflation tends to improve the situation better than the deflation we are approaching.

UPDATE: A friend suggested that Chris Hedges’ article reminded her of this Barbara Ehrenreich talk, put to cartoons – Smile or Die!

Mark Boyle over at Just for the love of it posted a useful piece on why he attempts to live a life of zero waste and simplicity.  Here is one quote:

"Because we are so disconnected from the embodied energy, embodied
suffering and embodied destruction that goes into the things we buy,
the natural ecology of the planet we share is being eroded by the
minute, factory farms and horrific slaughterhouses have become insanely
'normal', and we kill millions of people in the middle east just so
that us greedy bastards can have the luxurious, built-in-obsolescence
gadgetry that oil cheap oil affords us. I am sorry if that sounds
harsh, but the truth shouldn't be avoided for fear of offence. One of
the problems in the media and the publishing world is that everyone is
so cautious that they'll upset the reader and lose some sales, and so
the truth is rarely laid bare. We're adults though, so lets all grow
up, it's really our ego's that are making this planet inhabitable for
many species."

Haiti had its latest devastation with the earthquake they suffered two days ago.  After being hit by four hurricanes in 2008 and 100s of years of US and French occupation/meddling, the earthquake was very devastating.

With at least three million people homeless, and likely over 100,000 people dead, it would be an understatement to say that things are dire there.  Bikes Not Bombs and WBUR have sites you can go to listing organizations that can help.  Locally, Partners in Health setup a page with news and ways for people to donate.  The Red Cross has setup a way to make a $10 donation by texting "Haiti" to 90999.

With 2.8 million homes foreclosed on in 2009 (higher than in 2008) and more bad economic news to come, it can be tough to find the money to give, but if you can, please do.

UPDATE: Just found out that my employer has a part to play in the Red Cross' 90999 text message donation program.  No company on the message path charges anything, so 100% of what you give goes to the Red Cross.  Not an endorsement, just a clarification.

[NOTE: I haven't seen Avatar, though being a fan of Aliens and some of James Cameron's other work (the less about True Lies the better), I am inclined to do so.  Still, spoiler warning if you haven't seen either Avatar or District 9.]

Annalee Newitz of Io9 hits the analysis on the head when she critiques Avatar as just the latest scifi rehash of an old white guilt fantasy.  From the previews I have seen, her take looks spot on.

She goes on to talk about white privilege and makes a good connection with the situation of Wikus in District 9:

Think of it this way. Avatar is a fantasy about ceasing to be
white, giving up the old human meatsack to join the blue people, but
never losing white privilege. Jake never really knows what it's like to
be a Na'vi because he always has the option to switch back into human
mode. Interestingly, Wikus in District 9 learns a very
different lesson. He's becoming alien and he can't go back. He has no
other choice but to live in the slums and eat catfood. And guess what?
He really hates it. He helps his alien buddy to escape Earth solely
because he's hoping the guy will come back in a few years with a "cure"
for his alienness. When whites fantasize about becoming other races,
it's only fun if they can blithely ignore the fundamental experience of
being an oppressed racial group. Which is that you are oppressed, and
nobody will let you be a leader of anything.

Whites need to stop remaking the white guilt story, which is a sneaky
way of turning every story about people of color into a story about
being white. Speaking as a white person, I don't need to hear more
about my own racial experience. I'd like to watch some movies about
people of color (ahem, aliens), from the perspective of that group,
without injecting a random white (erm, human) character to explain
everything to me. Science fiction is exciting because it promises to
show the world and the universe from perspectives radically unlike what
we've seen before. But until white people stop making movies like Avatar, I fear that I'm doomed to see the same old story again and again.