I completed the Torvalus Dark Knives a week or more ago, but I finally got around to photographing them. 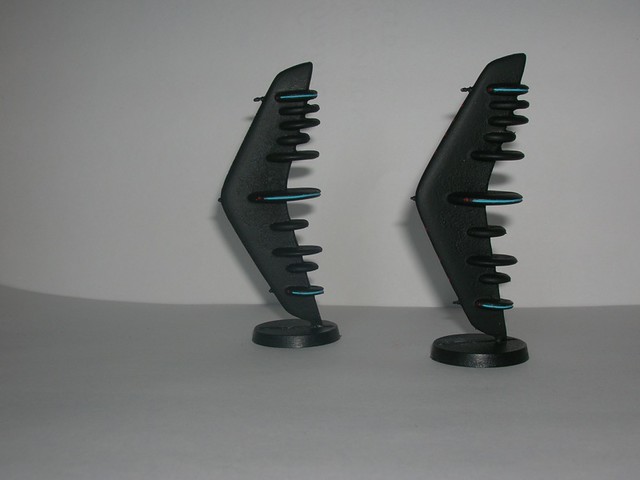 How I made them:

A race of Gamblers and tricksters, roughly resembling a meter tall transparent protozoan covered in scillia. They, and the Kirishiac, are the only First Ones not to ascend into energy beings, mostly because of philosophy. They bet on everything, what race will exterminate which species, whether this star will blow up in so many years, stuff like that. They maintained fairly good relations with their inferior middle-borns, but
often as not posing as someone else.Therefore, they invested enormous amounts of research into stealth. Their ships can hide from any of the First One’s advanced sensors, even from the Walkers and the Triad, using what is called the “Shading Field”. It works as damage prevention, as well. They can create sensor ghosts, fully realistic projections, they have a microjump system called a Transverse Drive that bypasses intervening space by means
other than hyperspace.

Their weaponry is rather straightforward, using a variety of highly advanced lasers. Their drone fighters are among the best the First Ones make, capable of inflicting more damage than any but the Triad Order aspect Sereph super-heavies. Fighting the Torvalus is like fighting ghosts, even among the first ones.