The Albert Einstein Institution has released an iPad app to accompany the How to Start a Revolution film about nonviolent revolution and Gene Sharp they released last year.  Not having an iPad, I cannot get it, but it looks interesting.  Sadly no Android app, yet.

I finally moved the whenimaginationfails.org and bywillalone.org domains over to this blog.

In the (generally) Facebook discussion of my Is there an instance where an armed citizenry prevented US government oppression? post, the responses were either of the form:

I did find two US historical examples of a group of armed citizens which successfully used firearm violence to counter what they perceived as government oppression:

For the white planter elites and their supporters, they perceived that they were fighting for their liberty from what they thought of as an oppressive Federal government.  However, former slaves, poor whites and most people a hundred years later would doubtless have a far different perspective.

Based on these examples, I believe that guns help authoritarian, elite power and really haven’t moved us closer to a more just society or even kept government from being oppressive.  In the examples above, they have been used to foster oppression.

The larger issue I get from my albeit brief analysis is that when firearms are used by those not in power, then they will be opposed by the larger society by all means necessary (see the examples in the earlier post). When those with firearms do have power, then there isn’t a need to resort to firearms or if they do, then they can use the power of the state to full effect to back them up.

In my mind, the historical examples don’t back up the thesis that an armed citizenry keeps oppressive government at bay, but I am still willing to hear about other examples.

One of the assumed truths in the US is that an armed citizenry will prevent the US government from becoming oppressive and taking away our liberties.  Recently I have seen people state that the Tea Party folks brought guns to their rallies and the police were respectful of their rights to assemble, but the Occupy movement (and various left-oriented movements in the past) didn't have guns and so got attacked by the police.

I am curious about this line of reasoning and have been seeking an actual instance of when an armed citizenry prevented government oppression.

I can think of examples where an armed citizenry didn't stop government oppression such as:

Indeed that the anarchists or Black Panther party had weapons (and sometimes used them in self-defense) were used as excuses to use overwhelming government power and surveillance on them, which is part of the reason nonviolent tactics proved more effective.

I posted two of the miniature game rule sets I been working on over the last many years.  Both are not complete, but it is better that they are available for comment than that they sit alone and unloved (except by me) on my computer.  They are posted on the side bar, but you can also find them here:

My By Will Alone site came about because of a nonviolent direct action miniatures game I have been working on.  I haven’t done much with it since 2007, but if you want you can find the rules I wrote:

I have play tested it a few times, pictures of which you can see from the front page.

Nearly too late on this, but October 2nd is Mahatma Gandhi's birthday, which is a national holiday in India called, Gandhi Jayanti or sometimes Ganghi Jayanti. Since 2007, October 2nd is also International Day of Nonviolence.  I leave you with Gandhi's seven social sins (Young India, 22-10-1925): 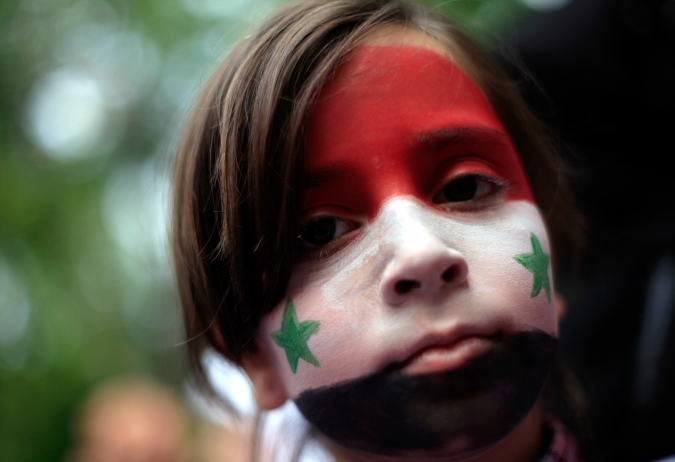 A girl wears a Syrian flag painted on her face during a demonstration against the government of Syria – From Al Jazeera's May 10th Syria live blog. May the universe protect her and all who struggle for freedom in our world.

Last December, Greenpeace put out a simple two person game called Deep Sea Desperation that focused on protecting ocean habitat for the Greenpeace player and drilling in more difficult places for the Big Oil player.  Lots rather fun.  The main page is here, while the rules are there.  There is a lively discussion about it at The Miniatures Page.

Apparently someone else came up with a game called Save The Whale! about eco-warriors vs. whalers.

Both games are free and look fun to play and educational as well.