I attended Lush’s Boston concert at the Royale Boston.  They remain one of my ten favorite bands and a band that I had never seen in concert before. It was a fantastic show. Tamaryn was the opening act.

Based off a photograph of a playlist someone else took, the playlist was:

Which should have been enough, but they were willing to play a first encore which I recorded:

And a second encore with only the song Monochrome:

I recorded parts of other songs, but I only recorded these four completely. I posted two of them on Twitter:

The pictures I took left much to be desired, but I cannot expect much from an iPhone 5s, even from being near the front side. I missed my D-SLR.

Here are pictures of Tamaryn I posted to Twitter. The are impressionistic.

I think I managed the right mix of dancing, singing to the music, taking pictures, recording video and holding my wife who was kind enough to attend it with me.

The Pirate Party had its annual Pirate Picnic on Georges Island today. I’ll post the best pictures I took later, but for now enjoy a slow motion video of the wake of the ferry on the way back to Boston. Hopefully you will find it calming.

John Oliver has a supremely funny take down of voter id laws as a solution to a problem that does not exist. In one study there were 31 incidents out of over one billion votes cast.

Voter id laws are a Republican tool to limit the number of votes by people of color, the poor and the young. It is gerrymandering the electorate on a wide scale and will lead to disenfranchising millions of voters. Or as Brecht said:

Stating that the people
Had forfeited the confidence of the government
And could win it back only
By redoubled efforts. Would it not be easier
In that case for the government
To dissolve the people
And elect another? 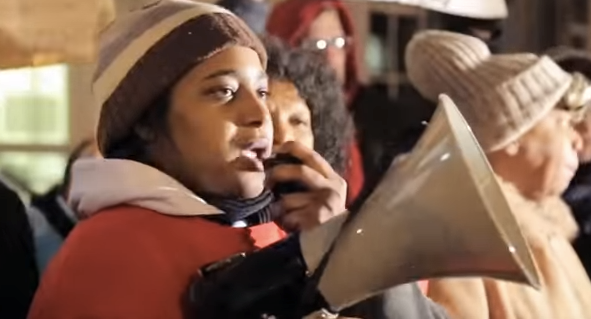 I haven’t voted for a major party candidate since 1996, and I don’t plan to change that this year. That said, the video of Erica Garner, daughter of the late Eric B. Garner and activist, endorsing Bernie Sanders for President is excellent and deserves to be shared.